We shouldn’t be surprised when speakers at political conventions toss out bones to their various breeds of constituency. After all, they want to appeal to everyone. A large block of voters have strong religous beliefs, so naturally the speakers want to appeal to them. Kerry tried to court the religous vote by not wearing his faith on his sleeve—a move which in the end may have made him appear more secular than spiritual.

Whoever wrote Rudy Giuliani’s speech didn’t fare much better. In an otherwise stirring speech, there comes these lines:

It’s obvious that the writer and the speaker here did not do their homework. (I actually didn’t get to hear the speech because of the media blackout, so I’m not sure if Giuliani made any last minute revisions) Will this gaffe not make me rethink my vote? No, but it is irritating to find such oversight among the ranks.

In his essay “The Mind,” Jonathan Edwards offers the following definition of consciousness:

Having taken a few too many personality tests recently, I appreciate this wholistic view of the mind. Most personality tests attempt to nicely categorize what is going on in our minds. A test that tells us that we’re say, an INTJ—may indeed be pretty close to reality. Edwards, however, shows us that there is a much better gauge of our own minds—our own minds themselves!

The rub, of course, is that we humans are remarkably lazy when it comes to introspection. Our minds typically only want to “feel” that which will not disturb the rest of our consciousness. Calvin’s notion that “without knowledge of self there is no knowledge of God” shows us the ultimate end of such a lack of mental feeing. How greatly would our lives be affected if we were conscious of all the depths of our own minds? 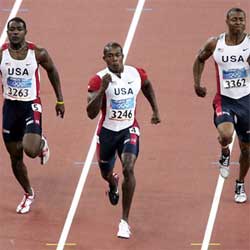 Why on earth the Greek crowd would jeer the American runners because their own star failed to show up for a drug test is beyond me—but I’ll wager they’ll think twice before they do it again.

John Rabe points to some free online offerings by Crossway Books which include a number of John Piper’s books! Also available for free is the forthcoming When I Don’t Desire God: How to Fight for Joy.

Has anybody out there installed Windows XP Service Pack 2 yet? Just curious. I’ll probably take the plunge soon and let you know if I have any problems.

UPDATE: Being the early-adopter wannabe that I am, I installed the update, and everything appears to be in order. It took about 20-30 minutes for the download (broadband) and install. So far all my apps are working fine (I’m still holding my breath a bit).

There, now I have the most secure operating system available [sic]. For some reason, I don’t feel any safer…

The media’s hissy fit about the SwiftVet supporters being Republicans borders on the absurd. Each new item that is uncovered comes with the expectation of a “eureka” moment, as in this Reuters piece:

The Bush campaign and the White House have said they have nothing to do with the Swift Boat group or the ads.

But the group received some of its funding from long-time Bush supporters and its new commercial features one veteran, Ken Cordier, who was on a Bush campaign committee until last week when he was forced to step down.

It was further disclosed late Tuesday that the Bush campaign’s chief outside counsel, Ben Ginsberg, has also been giving legal advice to the Swift Boat group.

It’s funny how the Democrats, with the scandal-mongering media in tow, are all acting so shocked about this. There is no smoking gun in this story. Did they expect that Swift Boat Vet supporters are voting for Nader? Why is this even news? Unless the “Bush campaign” has suddenly been redefined by the FEC as “anyone who votes for Bush,” Kerry doesn’t have a prayer with his FEC inquiry. Isn’t it time Kerry just answered the charges and put this thing to rest?

What are the skills need to play God? Ellen DeGeneres, who has George Burns’ former role in a remake of Oh God! seems to have prepared well:

“Ellen is a strong comedian and she has always done material about God and questions about God,” said Jerry Weintraub, who produced the original movie and also will oversee the remake.

I guess that’s all you need. Dare I even ask what embargo of creativity caused someone to consider doing a remake of such a film? Are Ishtar and Gigli next in line for do-overs?

In an age such as ours, when boys grow up to be either “wimps” or “barbarians,” where is the modern-day knight? Does he even exist? If so, then what does he look like—how does he act? These are all questions explored by Brad Miner in his new book, The Compleat Gentleman: A Modern Man’s Guide to Chivalry.

Considering the abdication of manhood from many of the would-be “men” in our culture, books about “how to be a real man” are not in short supply. Just go to any bookstore, secular or Christian, and find volume upon volume of books on how to be a more sensitive man, how to deal with your deepest psychological hurts, and even how to be a wilder man. The Compleat Gentleman is none of the above.

The compleat gentleman, Miner suggests, consists of three elements: the warrior, the lover, and the monk. The warrior is guided by both strength and honor, traits lacking in today’s therapeutic culture. Writes Miner, “…strength and honor more dependably keep the peace than does palaver about psychic posture and moral equivalence.”

The lover practices the virtues of chivalry which, “comes down in the end to respect for women.” The author argues that while men and women don’t have to be completely equal, the compleat gentleman allows a woman to be what she wants to be.

The monk is the side of the compleat gentleman who is devoted to learning throughout his life. This learning is not mere bookishness, but extends to spiritual realms as well. Miner, a Catholic, offers for comparison the monastic life with the gentleman-monk.

There are two ways to look at a fellow’s sprezzatura: on the one hand, it means discretion or, more grandly, prudence; on the other, it means restraint, which may even be concealment.

These are, of course, very counter-culture qualities in an age when men are constantly told to express their inner feelings more and more. Keeping things close or showing restraint is considered repressive and even unhealthy in our hyper-psychologized climate. To say that the potent coolness of sprezzatura is lacking in our culture is understatement. The compleat gentleman stands against the grain because not only does he do something, but he does it with nonchalance, when everybody else would be tooting their collective horns.

I do have a couple of small quibbles with Miner’s work. First, I think he goes too far with equating the physical abilities of men and women. His point is to show that the issue of keeping women out of combat is a matter of honor and prudence rather than inequality, and this I agree with. When he says that modern women are able to meet the physical requirements for combat, I’d have to disagree. While there may be some “Amazon” women who probably could beat a man in a fistfight, these are extremely rare, and even fewer of these women could defeat a well-trained soldier. Men and women are simply made for different purposes. Make no mistake—Miner does argue against women in combat, I just think he goes a little too far with his concessions.

Second, when Miner uses Stoicism as a backdrop for the monkish sprezzatura of the compleat gentleman, he mentions the Apostle Paul as expressing Stoic qualities. This is probably not the best description of Paul—the determinism exhibited by Stoic philosophy is of a much different nature than that of Paul.

As I said, these are minor quibbles. Overall, The Compleat Gentleman is a refreshing departure from the hodgepodge of “men’s movements” that clutter the scene. If nothing else, it points men toward a recovery of honor, a virtue that is scarce these days.

I’ve made several new addtions to my “Weblogs of Note” blogroll. Among them:

Matthew White’s South End Grounds is a baseball-themed political blog from Tennessee. White is an ex U.S. Marine, and his “Adventures in Parris…Island” series is a must-read.

John Rabe is sharp Christian blogger (apparently from Florida—but I won’t hold that against him) who has in the last week posted a report on the hurricane relief efforts in Punta Gorda and a thoughtful “Cautious Defense of Price-Gouging.”

Finally, my friend Charles Halton has entered the blogosphere with Marduk’s Terror, a blog which he describes as:

A bridge that spans the ancient times of the Near East and the modern world of blogging and $5 cups of coffee (plus all sorts of side trails and quick forays into other areas).

Is Bob Costas writing a book on the Olympics? Each time event coverage ends and we’re taken back to the acerbic Costas for his commentary on the athletes, there he is wielding his ink pen as if we’ve interrupted him his writing of a masterpiece. Don’t get me wrong—Costas has one of the best voices in the game, and he’s occaisionally interesting, but the whole thing with the pen seems a little Bob Dole-ish.