In yesterday’s Battle of the Bottomdwellers, Tennessee finally met its match in the Kentucky Wildcats. All season long, the Vols have waited for a team that was as good or better at throwing away a victory, and Kentucky rose to the occasion.

All frustration aside, I was encouraged by Erik Ainge’s performance — as well as the continued success of Arian Foster. The same mistakes that haunted the Vols all year were still present, however, and the Vols have a long way to go and short time to get there until the Sept 2, 2006 game against U Cal Berkeley. Let the staff rearrangement begin… 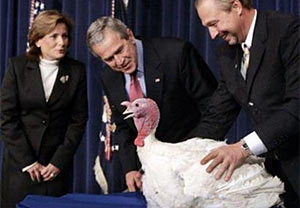 Is is just me, or does anyone else think it would be cool if just once the President upheld the turkey’s conviction instead of issuing a pardon?

Yes, I’m ready for a break. And yes, I think it would be cool. Save the neck for me, Clark.

A while back, I noted the similarities between Fox’s House (pretty much the only television show I watch with regularity) and Arthur Conan Doyle’s Sherlock Holmes. In Tuesday’s episode, the producers/writers bent over backwards to show the connection.

It may have slipped the notice of the casual observer, but surely didn’t slip by us here at TruePravda. In the opening scene, House and Dr. Wilson are exiting House’s apartment. For a moment, we see the address on the side of the building over House’s shoulder: 221B. I’ll bet he even lives on Baker Street.

In November 1982, USA Today was just two months old, President Ronald Reagan was in his first term, the Soviet Union was knee-deep in Afghanistan, and Knoxville, TN had just wrapped up its hosting of the 1982 World’s Fair. The Tennessee-Vanderbilt football game was played in Nashville that year, and a funny thing happened — Vanderbilt won. They haven’t won since. Until today.

Vanderbilt, the school that runs its football team under the rubric of its intramural department. Vanderbilt, known for its academics and being the divinity school of choice for one Al Gore, Jr. Vanderbilt, the whipping boy.

Vols, next week you play Kentucky, a school whose perennial battle cry is “just wait ’til basketball season.” I’m asking you — pleading with you — lay off the turkey this week until you get this win. I don’t even want to contemplate the alternative.

I love the U.S. House of Representatives. It’s devoid of the haughtiness of the Senate, and unlike the smaller legislative branch, the Republicans in the House actually realize that they’re in power.

The House of Representatives sounded more like a rowdy House of Commons Friday night, as Republicans called Rep. John Murtha’s bluff on an immediate Iraq withdrawal:

At one point in the emotional debate, Rep. Jean Schmidt, R-Ohio, told of a phone call she received from a Marine colonel.

Democrats booed and shouted her down _ causing the House to come to a standstill.

If the Dems keep this up, we’ll all have to pull out our “Sore Loserman” gear again. Now if only the limp-wristed Republican Senate will get a clue…

The Acton Institute’s Powerblog points to interview with University of Georgia communication professor Thomas Lessl, who notes that:

…scientific culture has responded to the pressures of patronage by trying to construct a priestly ethos — by suggesting that it is the singular mediator of knowledge, or at least of whatever knowledge has real value, and should therefore enjoy a commensurate authority. If it could get the public to believe this, its power would vastly increase.”

I think most would agree that science is a means for acquiring knowledge. If you’re bound by a naturalistic view of the world, it quickly becomes the only arbiter of knowledge.

As the sole means of knowledge, the scientist takes on a priestly role, which would fit well with Le Sabot Post-Moderne’s assertion that the treatment of the Inteligent Design movement by many evolutionists is akin to branding them heretics.

“Congress shall make no law respecting an establishment of religion, or prohibiting the free exercise thereof…” — The First Amendment to the U.S. Constitution

When it comes to the First Amendment, we Americans often focus most of our attention on the establishment clause, debating whether or not a “separation of church and state” lies within the phrase. The “free exercise thereof” segment is often neglected due to the fact that most of us in the United States have little trouble worshiping in the manner of our choosing. This is not always the case in other parts of the world.

Take, for example, a recent report regarding the former Soviet republic of Belarus by religious freedom organization Forum 18:

State authorities have insisted to Forum 18 News Service that religious literature was lawfully confiscated from a street library in eastern Belarus. Bobruisk City Executive Committee vice-chairman Mikhail Kovalevich told Forum 18 that the Baptists had both “ignored” and “violated” the legal procedure for holding religious events by acting without state approval. “Religious events should be in a house of worship, not on the street,” he stated about the street evangelism. The Baptists have been told by the head of the local state Ideology Department that the confiscated literature – including copies of the New Testament – would be sent for expert analysis and might not be returned at all, and that a court will soon resolve the issue.

It’s difficult for post-cold war Americans to imagine a state in which all religious activity must be registered with, and approved by government bureaucrats — a state in which anyone refusing to submit their worship practices to government oversight is subject to fines and even imprisonment. Difficult or not, we should express more than mere diplomatic concern over such policies — whether they stem from out-of-the-way nations like Belarus, or large Asian “most favored nation” trading partners.

Much of the time, celebrities seem far removed from the realities of everyday people. They live their extravagant lives with little regard or even awareness of the goings on of the masses. However, from time to time, certain celebrities transcend their trappings and try to show that they’re “real people” just like everyone else. Consider the recent interview that actor Dennis Quaid gave to Beliefnet regarding his religious beliefs. Quaid considers himself a Christian and a Baptist, yet makes some conflicted claims regarding his faith:

Beliefnet: What’s your own religious background, and where are you with it now?

Quaid: I grew up Baptist and still go to church. I myself have explored other religions, because I want to know what it is that makes other people tick. I find we’re all talking about the same thing, really—it’s all God.

Beliefnet: What’s the most interesting thing you heard?

Quaid: What I find is that we’re all human beings and that it’s all very similar, what we believe. At the bottom, there’s really not that much difference between Christians and Muslims and Hindus and Buddhists. We all worship God.

There’s nothing particularly shocking about this view — it’s probably one of the more prevalent views among Americans at large, even among many so-called Christians. The argument typically goes something like this:

The conflict, of course, is that this view is at odds with not only orthodox Christianity, but many of the other religions that Quaid sees as “all the same thing.” The gods portrayed by Islam, Hinduism, and Buddhism are all fundamentally different from one another, much less the God of Christian belief.

Dennis Quaid and relativists like him may well believe that all religions are basically the same. The problem is that such a theology cannot be lived out without destroying one or more of the beliefs in the process. Like the mythical Sasquatch of the forest, relativism doesn’t live in the real world.

Islam, Hinduism, Buddhism, and Christianity all make unique claims. The right question is not about what all these have in common, but which one is true. The relativist wants to sacrifice truth for a commonality that even Bigfoot knows is not there. The irony is that the understanding that relativists claim to gain from seeing all religions as the same only leads into greater misunderstanding of reality.

It’s well into November, and at just shy of a year, the boy seems almost ready to get his driver’s license. Well, maybe not, but some of the photos below might give a hint to some future aspirations: