WARNING: the following post is graphic in nature, and not for the faint-of-heart.

The bill passed last week by the South Dakota legislature which makes it a felony for a doctor to perform an abortion has not surprisingly ruffled many a feather of those in the pro-abortion realm. Perhaps in an attempt to perpetuate the “back-alley — coat-hanger” mythology, one blogger has posted “For the Women of South Dakota: An Abortion Manual.”

In a tone that has all the glibness of a manual for doing the dishes, “Molly” gives instruction on how these newly-deprived South Dakota women can perform abortions for their friends:

As you grasp the sac with your forceps, twist it away so that it detaches. You will now need to remove small pieces of fetal material and membrane from the uterus with the forceps. Some of these pieces will be distinctly identifiable as fetal material. Save the material until the end of the procedure on a piece of plastic, so that you can be sure the entire fetus has been removed. If doing this sounds too ethically challenging, remember that fetuses do not have the capacity to feel actual pain until the third trimester. You are not “hurting” it, and it has no awareness, nor the capacity for awareness, that you are extracting it.

Nice that this blogger has concern for ethical matters, because it gets worse (emphasis mine):

Scrape from the uterine walls, scraping material toward the cervix. Use the same general form of stroke you would use to scoop ice cream, and don’t be afraid to scrape fairly hard. Scraping softly could leave tissue behind, and if there’s anything you don’t want, it’s that.

If abortion a la mode isn’t enough to make you squeamish, consider her clean-up procedures:

When you feel the curettage and removal is complete, make sure you examine the fetal material you have already extracted. If you’re missing anything obvious — for instance, a head — make sure to find and remove it.

The abortion issue generally hinges on the question of just where and when humanity is found. While the discussion of humanity generally lies with the fetus, in the case of the manual’s author, I wonder just how much humanity is present in her own apparent frivolity.

The danger with the culture of death is not that it champions death so much as that it trivializes life. I’d wager that few are the women who have experienced an abortion that think of it with the fondness of a trip to the ice cream parlor.

Ten years this week — February 20, 1996, to be exact — I first put up a “home page” on the world wide web. My advertising professor, Dale Brill, taught a optional two-hour short course on HTML, a course that would remain the extent of my formal internet education. A few days later, I had a web page. The site consisted of one page creatively titled, “The Home Page of Jared Bridges.” It took me another week before I figured out how to add a photo to the page.

My site was housed initially on the University of Tennessee’s servers, and migrated after college to whichever ISP I was using. I acquired my domain name in 2000, and turned the site into a blog in 2003.

Today, it’s difficult to imagine a time without the tool that is the internet. A year after I built the web page, I first ordered books from an upstart called Amazon.com. I held my breath as I sat in the computer lab and clicked “submit,” wondering where my credit card information would end up. Those were the pioneer days, when the mention of the term “website” in most company was likely to conjure up visions of a spider’s lair.

For nearly a third of my life now, I’ve had a some sort of web presence. In the last ten years, I’ve seen the web used for the extremes of both good and bad. In a moral sense the internet is neutral — it can reflect both the sinfulness and Christ-hauntedness of those who use it.

I’ll be the first to confess that at times I’ve used this unique form of communication to appeal to more to my own vanity rather than reflecting the glory of One whose communication brings life out of nothingness. On the internet, as in life, the self can be manifest in many false ways. On the internet, as in life, we need more selves that better reflect the reality of our Creator’s world. May God make the next ten years prosperous in pursuit of that goal.

In case you’ve been constantly refreshing your browser over the last few weeks in hopes that a new post would appear here at TruePravda, your diligence in mouse-clicking will soon be rewarded.

Following some busy times, a vacation in Arizona (the subject of which will be an upcoming travelogue), and my failure to win a medal in the Olympic plastic sledding competition, it looks like the path is cleared for regular posting to resume. Stay tuned.

Old computers can be a bit of an annoyance. They tend to lock up often, won’t run the newest software, and if it is one of those off-white boxes that were so common around the turn of the century, it may have even turned yellow by now.

While there’s not much you can do about yellowed plastic (although I’d venture a guess that bleach would work), there is an option other than the trash heap. After all, you paid so much for that computer back in 2001 it just doesn’t feel right sending it to its grave when all the parts are still working. Is there any hope?

END_OF_DOCUMENT_TOKEN_TO_BE_REPLACED

Since everybody loves to hear about the nuts and bolts of a blog, I thought I’d let my highly-technical readers (37% of you use Firefox, after all…), know that I’ve finally upgraded TruePravda to WordPress 2.01 from 1.52. The upgrade was effortless, although I had to upgrade many of my plugins. My take on the new version: fancier, but slower in the back-end. Still it’s a needed upgrade, as all future development will be based on it.

I’ve been using the new version for a little over a month on some other sites I’m developing, and finally squeezed in the time upgrade this blog late one night this week. The RSS feeds were down for about a day because of an old WP Hashcash plugin — so watch out for that if you’re upgrading and use that plugin. The RSS feeds should be fixed now, but if you’re still having problems, please let me know. Of course, if you read this site via RSS, then you probably won’t even see this post if the feed is still down…

I had my first experience at Rupp Arena tonight watching the Vols dismantle the Kentucky Wildcats with my Kentucky-fan wife. The Cats were gracious hosts to an orange-clad Vol fan who was one of the few disperesed throughout the arena. 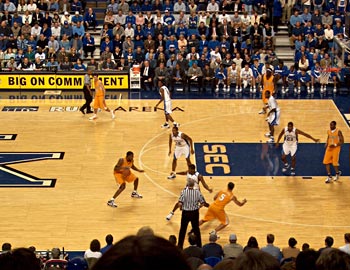 The Vols are orange-hot, and this win at Rupp was a long time coming. Yes, after a generation, Tennessee basketball has come into its own. Go Vols!

When it comes to film, bears usually end up in a metaphorical role. Think about Bart the Bear, who played in such films as The Edge, and Legends of the Fall. Bears are typically portrayed as the powerful adversary who lurks just beyond in the tree line. The protagonist must muster up what strength he can, and eventually face the bear, lest his manhood be questioned.

In the make-believe world, the bear is the aggressor. In the Werner Herzog documentary Grizzly Man, the role of aggressor is left to another character: the fool. Grizzly Man recounts the life of Timothy Treadwell, a surfer-type turned amateur naturalist, who went to Alaska every summer to camp out with the grizzly bears. He observed, filmed, and talked to the bears without any weaponry. After 13 years of surprisingly close contact with the region’s grizzly population, Treadwell and his girlfriend were attacked and devoured by one of the very creatures he loved.

While the film doesn’t show Treadwell’s actual demise (there was an audio recording of the event, but Herzog tastefully declines to play it in the film), the descent into his own quixotic version of reality is well-documented through Treadwell’s video footage. In his mind, Treadwell was the sole protector of the bears. He claimed that the bears were in constant danger from poaching, and his presence there kept the bears safe from them.

In one clip Treadwell, hidden behind cover, filmed some of these so-called poachers — a group of fishermen who were simply taking photos of a bear while keeping it at bay by tossing rocks. Apparently, Treadwell saw anyone else who entered the bears’ territory as predators.

Legend has it that St. Francis of Assisi went out into the wilderness to preach the gospel to the animals. Timothy Treadwell went into the wild to preach himself. He saw himself as the bears’ savior, and boasted to the camera of how he “would die for these animals.” His prescience, evidently, was better than his judgment.

Timothy Treadwell was a fool, no doubt. His death, however, is not something to be relished. It is true that if you play with fire, you’re bound to get burned, but Treadwell’s story evokes sadness more than anything. For all his foolishness and Mister Rogers–like character, Treadwell was a uniquely gifted individual. When such giftedness should have caused him to give thanks to his maker, Treadwell became a god unto himself. A god which in the end was powerless to save him and the bear that killed him.

I’m a grilled cheese fan. There are few pleasures in life that are so simple, yet so tasty — especially when there’s two slices of cheese involved. I’ve even been known to add a little bacon on rare occasions. What’s remarkable about this “news” story is not that Sonya Thomas ate 26 grilled cheese sandwiches — the remarkable part is found further down in the article:

On the eating contest circuit, Thomas is known as the “Black Widow,” apparently because she has defeated so many larger men.

Did you catch that? There’s actually an eating contest circuit. Back in the college dormitory days, I watched a guy down 30 raw eggs in a dorm-wide exhibition of skills. As I recall, the fearless fellow dropped out of school soon after, never to be heard from again. Little did he know he could have taken his show on the road and made the big-time…