If you haven’t yet read the German Der Spiegel interview with Iranian president Mahmoud Ahmadinejad, go read it now. If it’s not enough to make you reconsider your summer vacation to Tehran this year, I don’t know what is. After speculating on whether or not he’ll attend the World Cup or watch it on TV at home, Ahmadinejad then proceeds to all but ardently deny the Holocaust, and suggests that the Germans are being undermined by the Jews:

Ahmadinejad: Let me ask you one thing: How much longer can this go on? How much longer do you think the German people have to accept being taken hostage by the Zionists? When will that end – in 20, 50, 1,000 years?

I’m not sure what to do about Iran right now — it is indeed a difficult issue. I do, however, hope that world leaders remember the folly of Neville Chamberlain. The shadow of a certain failed Austrian painter looms large with Mahmoud Ahmadinejad, and it would be dangerous to underestimate him.

I had never heard of it until last week, but when I was told that watching the 1991 documentary “The Dancing Outlaw” would change my life, I was skeptical. After seeing it this weekend, my life will never be the same.

The fact that is that Jesco White, the last of the mountain dancers, is for real, and has to be seen to be believed. That is all I can say. Just watch it, and it will be in your head for the rest of your life.

You can watch it on the internet here, and order the DVD here. 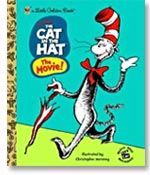 I’ve never been a big fan of Cliffs Notes. Though the publisher calls their product “trustworthy study guides,” we all know what they’re used for 99 percent of the time. They encourage laziness, illiteracy, and all the other bad things your high school English teacher warned you about.

There was one occasion, however, that I used such a “tool” to cover for academic inadequacies. Once, in college, I was required to write a 2-page essay on Erich Maria Remarque’s All Quiet on the Western Front. At the time, there were several other papers upon which I was procrastinating, so the 2-page essay — along with reading the book — fell by the wayside.

The night before it was due, I swallowed my pride and went to the library to check out the movie. Unfortunately, the library’s only copy was broken. On to Plan B — Cliffs Notes. Once again, the library came up short. What they did have, however, was a Cliffs Notes–type one page summary not of the novel, but the movie. By that time, I was grasping at straws, so I read it, and wrote my essay. I won’t reveal my grade, except to say that it wasn’t a B,C,D, or F.

All this came to mind last weekend when I noticed a peculiar book in the childrens’ book section of a major bookstore. It was one of those “Little Golden Books” and bore the title, The Cat In The Hat: The Movie.

Make no mistake, this was a book, not a movie. I opened the book and saw that it was adapted by Jesse Leon McCann, illustrated by Christopher Moroney, based on the 2003 movie, which was inspired by the 1957 book by Dr. Seuss. A book, based upon a movie, based upon an original book — a book that is still in print. I’m not making this up.

I did pretty well with my essay based on a twice-removed account of a work of literature, but I’m sure the only people doing well with nonsense like this are the publishers who “extend the brand” of the late Dr. Seuss just a little bit further. Unfortunately these guys are missing the boat. I’m waiting for the DaVinci Code Movie book. That’s where the money is.

Part of the trouble with reading six or seven books at a time is that some really good works get set aside as I “sneak a peek” at other volumes, which in turn get cast aside in favor of other titles, and so on — it’s quite the vicious cycle. Call it attention deficit disorder, call it boredom, call it sheer neglect. Whatever it is, I’m often guilty of leaving well deserving books to the wayside.

Right now, however, I’m playing catch-up and I’m loving it. David Wells’ No Place for Truth is a dead-on account of evangelicalism’s theological decline in the face of modernity. As I read the book I have to be conscious of not constantly expressing vocal agreement.

One book that has indeed caused me to speak up as I read is John Kennedy Toole’s A Confederacy of Dunces. It’s the funniest novel I’ve ever read and has sent me laughing out loud (LOL) on more than one occasion. Toole’s Ignatius Reilly is unlike any character I’ve ever experienced in literature before — quite singular.

Also in the queue is Mark Bowden’s, Guests of the Ayatollah: The First Battle In America’s War With Milliant Islam. Bowden, author of Black Hawk Down, chronicles the 1979-1980 U.S. Embassy hostage situation in Iran. If you haven’t yet read the excerpt in The Atlantic dealing with the failed Delta Force rescue mission, you’re missing out. I had to practice true restraint to keep from diving into this one when it came in the mail last week. I have to finish the other books first, right?

Evil is most fearsome when it is encompassed in a person, and few persons throughout history have encompassed evil as well as Adolf Hitler. It is hard for most people to even conceive of someone like Hitler, but imagine trying to play him in a movie. When it comes to tyrants, most films go overboard — the tyrant either comes off as a caricatured villian with the requisite sinister laugh, or he is made to look too “human,” with his terrible actions beyond his control.

Downfall avoids both extremes, and in doing so makes for one of the scariest and compelling World War II films ever made. Chronicling the last days of Hitler’s regime in Berlin, the story is largely based on the testimony of Hitler’s secretary Traudl Junge. That the film is in German (with English subtitles, of course) helps the overall feel, and the performance of Bruno Ganz as “Der Führer” is both riveting and revulsive. You may recognize Ganz from his role as Staupitz in the 2003 film Luther. In Downfall, you will only recognize him as Hitler.

This film is not for children, and it is certainly not for the faint of heart. The maniacal behaviors of Hitler and his confidants (most notably the Goebbels) are vivid reminders of the evil that can exist within the human heart, as if we really needed such a reminder today.

It’s not often that a novel undergoes such scrutiny as has Dan Brown’s The DaVinci Code. Debunking the wildly popular thriller has become a virtual industry unto itself, and not without warrant. Brown’s fictional account of a “search for truth” was designed to push the buttons and step on the toes of the faithful. Controversy is good for business, and business is good.

Having recently finished The DaVinci Code, I’m left a bit mystified — and not at whether or not Jesus married Mary Magdalene. I’m just wondering how such a mediocre novel has gone so far in the first place. All heresies aside, it’s just not that good of a book.

To begin with, the 454 page book has 105 chapters. That’s right, one-hundred five — an average of 4.32 pages per chapter. To put this in perspective, try to see if you can find another single-volume book in your home with anything approaching that number. I’ll bet you can’t. I own a lot of books, and the closest thing I could come up with is Tom Clancy’s 1028-page The Bear and the Dragon, which boasts 61 chapters (16.85 pages per chapter).

The fact that nearly every chapter ends with its own cliffhanger doesn’t help the situation. Good novelists build tension. Dan Brown bursts the readers’ balloon again and again before it has even had time to be refilled. At regular intervals during his choppy dialogue, Brown somehow sees the need to teach us the “real reason” behind what seems like everything we do in the modern world. While the reader may often feel like he is smarter than Brown’s cardboard characters, Brown incessantly reminds us that he is smarter than his readers.

The only things I found remotely interesting while reading the novel (aside from snickering at the frequent historical gaffes), were the codes themselves. I will give Brown credit for creating a few catchy code-laden rhymes. I suspect that this element, coupled with the book’s controversial claims, accounts for the novel’s success.

Conspiracy theories are not new to the landscape of folklore. The UFO folks have been at the game for decades, and the Illuminati go back even further. Apparently, Dan Brown thought that the vast right-wing conspiracy was insufficient to satiate the paranoid, so he offers us a novel in which he finds the “sacred feminine” and Knights Templar under every stone within Western civilization.

With regard to “debunking” the novel’s claims, others (both Christian and non-Christian) have more than adequately done the job. Brown’s claims of authority lie in the mouths of his fictional scholars, Robert Langdon and Leigh Teabing. Even outside the fictional world of the book, Brown cites real-world scholars as his basis for believing that “Almost everything our fathers taught us about Christ is false.” The truth is, however, one can find a scholar who believes just about anything. Truth is not so indiscriminate.