My great-aunt Nancy Sharp died today at the age of 93. On the surface she might have seemed to be just an ordinary woman, but in her ordinariness she was a woman of extraordinary grace.

My late grandfather’s oldest sister, she was born on July 31, 1914 in Knoxville, Tennessee — just as World War I was beginning in Europe. She had to quit school at age 14 during the Great Depression so her mother could go to work. Aunt Nancy took care of her siblings. At age 16, she went to work so her mother could return to caring for the children, and she worked pretty consistently until she was 85 years old. So much for early retirement. 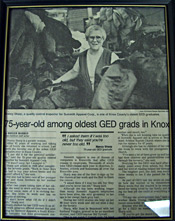 When she was 75 years old, she became one of the oldest people in Knoxville to get her G.E.D. She studied for and obtained her degree while working 40 hours a week, again, at age 75.

She was converted to Christ at age nine, and later became a member of Beaumont Ave. Baptist Church in Knoxville in 1927. Her local church membership was “upgraded” just today after 80 years as a member.

She married late in life, so she had no children of her own, but she never lacked for outlets of love. Her many nieces and nephews were the beneficiaries of Aunt Nancy’s quiet grace.

For as long as I can remember, Aunt Nancy was a fixture in my life. Several times a year as I was growing up, our family would make the 2-hour trip to Knoxville, and Aunt Nancy’s house was always a much-anticipated stop as we made the rounds visiting relatives. There are only a handful of my 33 years when I didn’t get a birthday card (for years filled with her signature $5 bills) from Aunt Nancy, and she never failed to remember Christmas.

In fact even in her later years, she failed to remember very little indeed. She was as sharp as her last name, and while her hearing began to fail her, her wits remained strong. I remember a particular visit I made to Aunt Nancy alone back in December of 2000, a visit that was followed by a first date with my future wife. As we talked about my late grandfather and their family’s upbringing, Aunt Nancy’s eyes lit up as she recalled her childhood — a childhood that would be measured by much hardship by today’s standards. Yet in that hardship was a fondness and love that still carried her late in life.

Aunt Nancy was an extraordinary woman who displayed God’s grace at the expense of displaying herself. Would that we might all be more like her.

Could You Live Without China? Intrepid journalist tries to live one year without buying anything made in China.

No non-profit has a better fundraising letter than does Mars Hill Audio. Typically 3-4 pages each, I usually save the thoughtful, essay-like letters by Ken Myers for my personal library. This summer’s letter examines the nature of Christian hope, and how many in the church have substituted an empty optimism for the solid hope offered by Christ. One aspect that is affected by this is the church’s attitude toward the world:

When I was a boy, many American Christians assumed that an alliance with the world was a bad thing. From [John 14:27], from Romans 12:1f., from James 1:27, from I John 2:15, and from many other less explicit biblical texts, they knew that worldliness was a condition fervently to be avoided by faithful disciples. Unfortunately, they believed that worldliness was adequately defined by delighted participation in almost any kind of cultural activity; movies, card-playing, alcohol, and tobacco were especially singled out, but the general principle was that “worldly” meant “bodily.” Since that time, the gnosticism implicit in such attitudes has been abandoned by many Christians, a change for which we must be grateful. But it seems as if American Christians have moved from assuming that all cultural activities are inherently suspect to assuming that all cultural activities are inherently innocent and beyond criticism. Rejecting a bad definition of worldliness, we exhibit almost no collective concern whatsoever about avoiding worldliness rightly defined.

In short, many Christians have swung the proverbial pendulum too far in the opposite direction, leaving just as far from the biblical mandate as they were before. Read the rest of the letter [PDF] for what Myers sees as a solution to the American Church’s missing of the mark.

I’ve mentioned it here before, but I’ll mention it again: a subscription to the Mars Hill Audio Journal is worth its weight in gold, although an MP3 subscription is only $30. Unlike other “talkies” (radio, podcasts, etc.), MHAJ has a long shelf life, and an uncanny ability to make you listen to some segments again and again to mine them for all their worth.

The greater the exaggeration, the greater the fall: Christianity Today speaks to the statistical shell game played by many churches today.

Braves’ manager Bobby Cox was ejected from the game last night, setting a MLB record of 132 career ejections. Don’t tell Bobby Cox, but I’ve seen quite a few baseball games in my life, and I’ve never seen an umpire overturn a call because the manager disputed it.

From The Onion: Churchgoer Tips God For Excellent Week. It’s satire, but the sad thing is that I’ve really seen this attitude quite often.

The Russians are often puzzling, and so is this Russian Puzzle…

You can’t always get what you want: Mick Jagger, of all people issues a video clip supporting freedoms for Belarus.

A new study shows that those bizzare “Baby Einstein” videos might not be such a bright idea .

Apparently the University of Florida is paying $50,000 to have suicide doctor Jack Kevorkian speak at their campus. Kevorkian has to obtain the permission of his parole officer in order to attend the event, but Gator students are excited nevertheless:

While many pro-life students are upset by the appearance, [UF student Ashley Emans] says “Kevorkian will be greeted here in Gainesville, Florida with open arms from many students and professors.”

Apparently Gatorade has been replaced by Kool-Aid as the official drink of the university.