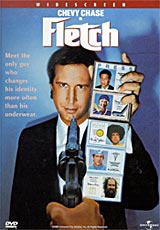 I couldn’t have been more surprised if I had woke up this morning with my head sewn to the carpet. Well, not really. It seems that Chevy Chase, star of the Fletch film series and the National Lampoons’ Vacation movies has tried to put the death knell in his ever-fading career by going on a rant that has even dyed-in-the-wool lefties embarrassed. Hosting a People for the American Way event, Chase had a few things to say:

Chase took the stage a final time and unleashed a rant against President Bush that stunned the crowd. He deployed the four-letter word that got Vice President Cheney in hot water, using it as a noun. Chase called the prez a “dumb [expletive].” He also used it as an adjective, assuring the audience, “I’m no [expletive] clown either. . . . This guy started a jihad.”

Chase also said: “This guy in office is an uneducated, real lying schmuck . . . and we still couldn’t beat him with a bore like Kerry.”

Yep, Chevy, you’re no clown. Just a sad semblance of the funny man you used to be. To repair your once hilarious reputation will take more than a Michael Moore-like tirade. I think we’ll need a set of pliers and some 30 weight ball bearings—because as you know, it’s all ball bearings these days…