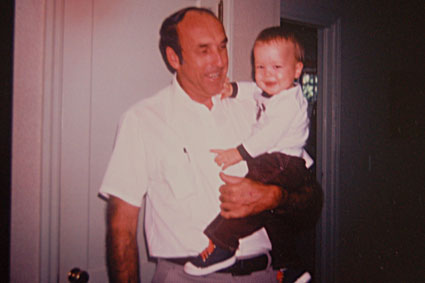 My grandfather, Samuel David Cooper, died on November 13, 1997. About ten years prior — when I was in 7th grade — I took a genealogy class in middle school. One of the class projects was to interview our “oldest living relative.” Well, Granddad wasn’t my oldest relative at the time, but he was the most convenient — and the most interesting. The consummate storyteller, he could turn even the most mundane story into an adventure. I taped the interview on Granddad’s portable tape recorder and microphone. The grainy, unprofessional, 20-minute recording that resulted became a treasure.

A treasure which I unfortunately misplaced for a number of years. When my parents moved a couple of years ago, I found the tape while cleaning out my old room. The tape — an old one to begin with — still played, but was on its last legs. Thanks to my friend David Salkeld, using his unknown arts of audio wizardry the tape was cleaned up the tape and converted to CD.

The interview, which took place around 1987 (give or take a year), concerned the life of my Granddad as he grew up. Topics covered include favorite foods, memories, games, folklore, and community. If you listen to the interview, you’ll note that my voice hasn’t quite changed all the way. And yes, my East Tennessee accent is as thick as sorghum syrup (I speak with rolling Scottish brogue now, you see). My interview skills are a bit lacking, but keep in mind that this is a 12 year-old kid just wanting to finish a school assignment.

When I hear my Granddad’s voice, it’s hard to believe that this interview occurred twenty years ago. It makes me smile when I hear it.

If your browser has Flash enabled, you can press “play” on the player below to listen:

Or, if you wish, you can download an mp3 file of the interview.

2 thoughts on “A voice from the past”