The other night, during a television commercial break, something strange caught my eye in a trailer for the new movie The Incredible Hulk:

It didn’t strike me until 10 seconds into the next commercial. Quick rewind (this is the stuff DVRs are made for!). Yes it’s just as I thought: 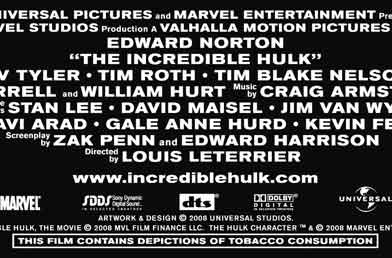 Notice the dire warning box at the bottom of the credit screen (which looks eerily like a McCain-Feingold style political disclaimer). Yep, just when you thought it was safe to enter the cinema again, they had to go and ruin it.

Nevermind that its PG-13 rating includes “Scenes of intense action violence, some frightening sci-fi images, and brief suggestive content,” this film contains depictions of tobacco consumption, for crying out loud!

Why can’t they just let the monstrous gamma-ray infected superheroes bludgeon each other to the death without bringing tobacco into the mix? Films these days are getting as dangerous as the front porch of the Baptist church of my childhood, which featured more than its fair share of tobacco consumption.

3 thoughts on “The Hulk must be an incredible smoker”