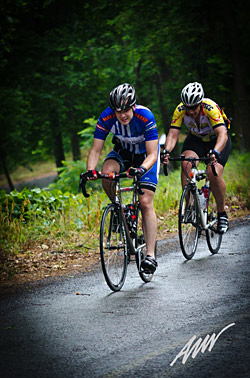 The showers drenched, but didn’t dally. By the time I made the turn onto the rough rural roads of northern Alabama, the rain had ceased and a steamy vapor began to rise from the pavement.  Aside from the bad roads, there was little clue save for a sparse state road marker that I was actually in Alabama, but the Sand Mountain climb soon gave all the verification I needed.

The climb, up what is apparently known as the “goat path,” is wooded with switchbacks and is not too steep, but long enough to make you use your lower gears (the website’s promised “2.5 miles at a 6-7% average grade” is about right).

It was still early enough for the field to still be pretty crowded, and the roads were wet,  it was a  fun climb.  I began to see, however, that my fellow riders were no novices when it came to climbing.  I did my best to make a good show to the top, but having two mountains down and only one to go offered little comfort.  Though still 50 miles away and out of sight, Lookout Mountain’s Burkhalter Gap still loomed large.

Geographically, Sand Mountain seems more like a large plateau.  Once on top, the course went on for miles and endless miles of rollers and flats.  Two rest stations at around 34 and 55 miles broke the monotony a bit, but large stretches of long, straight roads where you could see cyclists for miles both forward and backward nearly made monotony a mountain of its own.

As I pushed through those desolate miles, a couple of guys in a paceline (with powermeters!) took pity upon me and invited me to join in with them. I took a few pulls on front and rotated through for about 15 miles until we joined with a larger group and the pace ramped up.  Too blistering blistering for me, I was dropped, and dogged out the rest of the rolling plateau on my own.

As we neared the descent of Sand Mountain, we crossed into Georgia and began to see some stunning views from the mountaintop into the valley below.  Also coming into view was Lookout Mountain, just across the way, waiting patiently.

Finally, Sand Mountain had come to an end — the only place left to go was down.  The descent was fast and furious, but not fatally so — despite the ominous rescue vehicles parked at couple of the switchbacks. Once at the bottom two roads diverged in a wood.  Would I take the one less traveled on, leading me back to the finish via the 90-mile route?  Or would I turn right with most everyone else and face the suffering that awaited me on the legendary climb up Lookout Mountain?