Given the recent Lance Armstrong and pro cycling doping scandals, I thought it might be worthy to show what the cycling world looks like more often than not — that is, undoped, unpaid, underprepared, and wickedly fun.  What follows is a report (in three parts) from an ride I undertook earlier this year.

One hundred miles in a day

In the opening to the band Alabama’s song “Mountain Music,” an old man wearily groans, “See that mountain over there? One of these days I’m gonna climb that mountain…”  We’re not told why the old man wants to climb the mountain. Perhaps it’s the clichéd “because it’s there” or perhaps he simply needs to get out of the valley. Whatever the reason it is that we scale such heights, there was plenty of mountain climbing available in Chattanooga’s 25th Anniversary 3 State 3 Mountain Challenge on 5 May 2012 — and for me, some left over.

The century bicycle ride wasn’t the first 100- mile trek I had done (I rode the excellent Storming of Thunder Ridge in central Virginia in 2011), but this course certainly put me in my place.  More about that later — for now, let’s start at the beginning.

With around 1500 riders in the race (I think, judging from the finish results), the starting line was pretty crowded. Keep in mind, this is only the third organized ride I’ve ever done, but it was by far the largest group.  The start outside Finley Stadium was well-orchestrated, however, and traffic was managed to keep us all riding smoothly to the first climbs just outside downtown Chattanooga.

Thankfully, most other riders were more experienced than me with pack riding, so it was relatively safe. I did, however, have to make an emergency stop to retrieve a water bottle when I veered onto an outside-lane rumble strip on a descent that sent my much-needed 2nd bottle into the ditch. 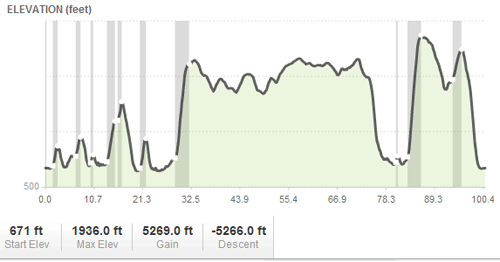 As you can see from the course profile, it wasn’t long before the roads began going up. The first “real mountain” was a short, gradual climb up the side of Aetna Mountain. I mean no disrespect here, but the only way I could be sure that we were on the mountain was by looking at my odometer — it was that easy a climb. It did have a fun and fast descent where I picked up my maximum speed for the day (42mph) on the long and straight ride down to the water.

Shortly thereafter, we reached Ladd’s Mountain — a smaller but similar climb to Aetna that doesn’t figure into the “3 Mountain” count. Ladd’s seemed to take as much effort as Aetna, and was easily manageable. Upon the descent of Ladd’s Mountain, I reached the first food station at 23 miles, with dark clouds looming overhead. I had learned from my previous century that the first rest station one is not one at which to make a pit stop. The lines were long, so after a quick top-off of my bottles, I was quickly back on the bike, but I was too late — large, heavy drops of water began to fall from the sky.