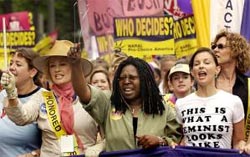 The pro-abortion march in D.C. over the weekend featured many name-droppable names:

Ashley Judd, Allison Janney, Susan Sarandon and other Hollywood celebrities shared the stage later with politicians, diplomats and leaders of the pro-choice movement.

Holding a white hanger, Whoopi Goldberg told the crowd: “Never again will this be the choice of any woman in our hemisphere.”

Whoopi and her kind weren’t the only ones marching for better tools with which to kill babies. The National Education Association—yes, the teachers union—was there in support as well.

What’s startling is that if you look at the photos of the march, it looks like these people are having GREAT time. These are many of the same people why decry, “we are not for abortion, we’re just for a woman’s right to choose.” It’s quite eerie when there’s such revelry over a matter like abortion.

2 thoughts on “Celebrites Have a Hootenanny Over Killing Babies”