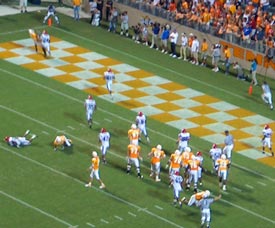 The above photo is Erik Ainge’s third quarter pass to Bret Smith for a Tennessee touchdown. As you can see, this shot streched the limits of the 3x optical zoom on my camera (that’s the ball about 2m above Smith in the end zone). My brother, a man who knows how to get things from time to time, scored us tickets in the east skybox of Neyland Stadium where the view was incredible.

The score (which was not too far from what I predicted) wasn’t really indicative of some major problems in Tennessee’s defense. Louisiana Tech’s early lead caught many off guard. An impressive Ryan Moats gave the Vols’ defensive line trouble, and the secondary looked poor at times too. Perhaps defensive coordinator Johnny Chavis needs to do some hollerin’ this week before we take on Auburn…

It’s looking more and more like Erik Ainge is assuming lead quarterback spot—not to fault Brent Schaeffer at all. Both QB’s showed much more poise than last week—especially while being pressured on the blitz.

Last year’s game with Auburn broke our momentum for the season. Let’s hope revenge is sweet.