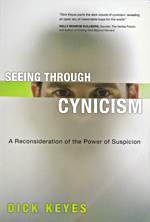 I have a confession to make: I am a cynic (though I’m skeptical about the fact).

Well, if I’m not a bona fide cynic, I do at the very least have a common tendency to be cynical. My undergraduate major was Advertising, and I studied subjects like persuasion, and targeted communication. When you’ve been trained to both see and exploit hidden agendas, it’s difficult not to become cynical about the world. After all, cynicism often cuts to the quick of the charlatanism that is so rampant in our society. A healthy dose of cynicism is good for the soul, right?

Dick Keyes book, Seeing Through Cynicism: A Reconsideration of the power of Suspicion,offers an in-depth look at an oft-neglected subject. It is by far the most self-convicting book I’ve read in a long time, and it is also one of the most constructive.

The very nature of cynicism often camouflages it from being seen as a damaging perspective. Says the author (p. 11):

Cynicism, as we use the word today, has to do with seeing through and unmasking positive appearances to reveal the more basic underlying motivations of greed, power, lust and selfishness. It says that every respectable public agenda has a hidden private agenda behind it that is less noble, flattering, and moral.

Often, to see a real hidden agenda is to see the truth. But does cynicism always accomplish this noble goal? Keyes argues otherwise. Contrary to the cynic’s hunches, every politician is not corrupt, every teenage boy isn’t after just “one thing” from a girl he wants to date, and every person who says something nice to you doesn’t always have ulterior motives. There are exceptions to the cynic’s penetrating eye.

Keyes examines the platform from which the cynic stands to see through things, ideas, and people. The one person the cynic often neglects tends to shine the light upon is himself. When he stands upon faulty assumptions, the cynic’s sight is compromised, and many otherwise good ideas and people might be cast away by the cynic’s hasty judgment.

The author does an excellent job of analyzing the landscape of cynicism, but he doesn’t stop there. Keyes provides a way out of such myopic cynicism that’s biblical, sensible, and surprisingly simple: humilty. A person who is steeped in biblical humility sees first the log in his own eye before seeking to pluck the speck out of another’s eye.

As I said the book is as constructive as it is convicting, and I heartily recommend it to all.

3 thoughts on “Seeing Through Cynicism”