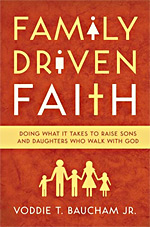 It’s ironic that within the evangelical church — a people who by and large claim their ultimate authority to be Scripture alone — it is tradition that is often the most difficult thing to change.

Voddie T. Baucham Jr.’s book, Family Driven Faith: Doing What It Takes to Raise Sons and Daughters Who Walk with God (Crossway Books, 2007) challenges many of our extra-biblical traditions with a tough but winsome approach. Instead of cultivating the latest ecclesiastical trends, Baucham takes a refreshing look at the age-old biblical institution of the family, and places it at ground zero for the work of Christ in the church.

The book covers topics ranging from the irresponsibility of men who abandon spiritual leadership to the growing biblical illiteracy among Christians who can’t even articulate their worldviews to their families, much less anyone else. Relating anecdotes from his own life, Baucham teaches how it is biblically necessary and possible for a family to worship together not just in church, but in the in the home as well. Some feathers are likely to be ruffled when Baucham tackles topics like education, where he takes an unapologetic (but reasonable) stand against government-sponsored schools.

These points are instructive, convicting, and even controversial, but none is more interesting and potentially paradigm-shifting than one of Baucham’s final points: the family-integrated church. This model, which is essentially an organizational subset of church polity, does away with age-segregated ministries and shifts the locus of ministry to fathers as heads of families. Surveying the current landscape of evangelicalism, Baucham observes:

One day you visit a church, your teen goes off to the youth service, your little one goes off to children’s church, the baby goes to the nursery, and you and your spouse get a great seat in a plush auditorium with first-class music, professional drama, a relevant, encouraging, application oriented, non-threatening talk, and you get it all in just under an hour. Moreover, you look at the brochures, and it’s right there in black and white: “Our youth ministry exists to do the job that you’ve neglected all these years.” What a deal! We don’t have to keep the little one quiet, we get our needs met, and to top it off, the youth guy is going to disciple my teenager (whom I don’t even like right now). Who cares if the youth guy has only been married a few months and has never even attempted to disciple a child of his own. “Count me in!” [p. 178]

Baucham readily admits this is hyperbole, but anyone who has set foot inside an evangelical church in the last 30 years will recognize the massive age segregation that occurs. Children’s ministries — a subset in themselves — are further segregated by the grade levels assigned by schools. “Young marrieds” meet for Bible study in a different place than that wily “College and Career” crowd. The “seniors” groups go on bus tours to Gatlinburg and Branson, while the “Youth” take their mission trips to the inner city.

Age segregation is one of the most impenetrable non-biblical institutions within the church, yet there’s absolutely no Scriptural support for these divisions. This does not mean, of course, that Scripture prohibits such segregation, but it does call into question why it has become such a staple for church organization.

I suspect, along with Baucham, that such age segregation more reflects the American educational system than a biblical model of intergenerational interaction. Baucham suggests that a family-integrated model would better meet the needs of discipleship than what has in recent years become the traditional evangelical approach. Youth groups and other age-categorized ministries are discarded in exchange for teaching and ministry that is organized around families rather than age.

Amid a culture that has little respect for the elderly, such an approach could do wonders. Younger adults would have more opportunity to learn from believers who have walked the road ahead of them, and the harsh transition that teens often endure from adolescence to adulthood would be obviated by living their theology around adults instead of solely their peers.

This will be a tough pill for most churches to swallow, given the practical implications of moving to such a ministry paradigm. After all, there are few who have any experience with doing church this way. In the end, however, Christ’s church should be governed by biblical principles, no matter how unpragmatic they might be.

Baucham himself realizes the uphill battle, and sympathizes with his friends who do not share his views. This does not, however, stop him from raising the issue. And that is what I find so refreshing about the book. Baucham succeeds in his ability to shine light on some pretty significant flaws in the church while still retaining a place at the table. Family Driven Faith critiques without casting away.

Read it if you dare.