In keeping with my yearly tradition, here’s a record of all the cities, towns, hamlets, or dots-on-a-map in which I’ve spent at least one night this year:

Proving the theory that years in which new children are born to my family are those less traveled: a record of all the cities, towns, hamlets, or dots-on-a-map in which I’ve spent at least one night this year:

Wow. My calendar tells me that today marks the sixth year of this blog’s existence. Postings are hard to come by these days, but none are more fun to write than ones like the post that preceded this one.

Six years ago I began blogging as an experiment. Almost nobody I knew had the faintest idea what a “blog” was (some speculated that it was something that came out of your nose, but no one could be sure…). It was over a year before I ever met another blogger in person. Nowadays, it’s hard to find someone who doesn’t have a blog.

The lights aren’t always on here around TruePravda, but believe it or not, someone is still home (the archives are full of rusty treasures). Who knows? Perhaps I’ll come up from the basement and visit a little more in the near future…

In the meantime, thanks for reading. 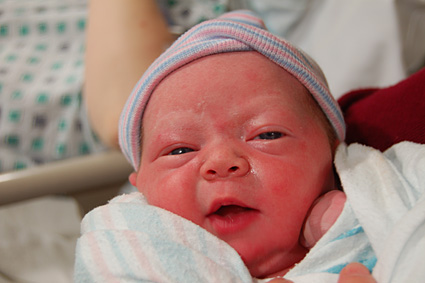 Praises to God for his handiwork.

“Seeing the crowds, he went up on the mountain, and when he sat down, his disciples came to him.” (Matthew 5:1, ESV) 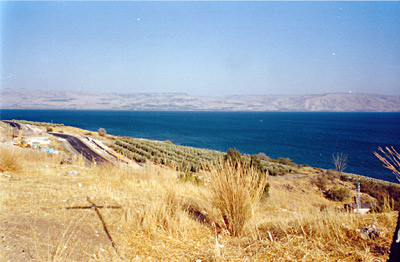 Above is a photo I took on a hillside near the shores of the Sea of Galilee nearly a decade ago.  The cross is a shadow of a marker on one of the proposed sites of the Sermon on the Mount.

It’s been going around the Facebook like wildfire, and even the inoculated among us are not immune.   So, here’s my humble contribution to the meme:

1. I don’t believe in randomness.  The irony in selecting 25 “random” things about oneself is thicker than Karo syrup, which is my favorite.

2. I grew up about 10 miles from a NASCAR racetrack, but I’ve never been to a race. I once won a pair of tickets, but sold the set for $35, which at the time I thought was a king’s ransom.

3. My undergraduate major was Advertising, and I once shared a Calculus class with Peyton Manning.   Who would have thought that he would have gone on to become such a great advertiser…

4. When I was in first grade, I got only one answer on a math test incorrect. I left this problem blank: 1-1=__. I was always told zero is nothing, so I left it blank.

5. I tend to keep my eyes open when I pray. This goes back to childhood, when I thought that the reason people closed their eyes when they prayed in church was because God descended from heaven and walked the aisles. I often tried to sneak a peek.

6. I have on occasion added “Pig Latin” to the repertoire of languages on my resume.

7. I’ve never been offered an interview from any of the aforementioned resumes. Arrow-nay inded-may were those prospective employers.

8. Every day, I get into cars with strangers to ride 25 miles to work (this is true!). So far I haven’t been abducted. If you’re reading this and I have been abducted, disregard the previous sentence and call the police already.

9. Quite the romantic, I proposed to my wife as we were sitting on a downed telephone pole. She didn’t see it coming.

10. Once in high school, some friends and I were chased by a sheriff in a Crown Vic., blue lights ablaze.   We got away.  I guess that means I’m still on the lam?

12. My favorite weather phenomenon is fog.  The reasons behind this are cloudy.

13. I try to always know more than I let on, but most of the time the converse is true.

14. Laden with a loaded internal frame backpack, I once tried to leap aboard a moving train while chasing it across an iced platform.  I was roundly tackled by a member of the Belarusian militia who proceeded to question my sanity in no uncertain terms.

15. I’m married to a Kentucky Wildcat who some would say is my complete opposite.  I like to say we’re complementary.

16. From Kindergarten through 12th grade, I only got in trouble at school one time.  In first grade I had to sit out ten minutes in recess for talking.  That’s it.  No paddlings (they did that at school back then!), no themes, no suspension, nothing.  Doesn’t mean I was always good.  Just means I didn’t get caught.

17. A life-changing encounter with Jesus of Nazareth spoiled any dreams I had of becoming a world-class con artist  (although I did want to be a lawyer for a little while…).

18. I’ve run a mile in under five minutes only one time.

19. My son is frighteningly smart, and watching him and my daughter grow leaves me in awe much of the time.  My wife thinks that my daughter has me “wrapped.”  She’s right, of course, but I can still pretend otherwise…

20. My favorite movies these days tend to be older ones.  Hollywood has lost the art of storytelling in exchange for gimmickry.

21. My favorite novel is Dostoevsky’s The Brothers Karamazov.  I read it ten years ago, and it took me six months to read.  It still haunts me to this day, and I plan on re-reading it this year to see what effect a decade of pondering can have on the book.

22. I cannot sleep unless I am lying down.  I’ve never slept in a moving automobile or on an airplane.  On one long, multi-day international travel disaster, this unique characteristic caused me to stay awake for 54 hours until I had a place to lie down.

23. I mourn the passing of a good T-shirt, pair of underwear, or pair of jeans.  My wife rejoices at the passing of such items (of mine), and I suspect she often contributes to their passing…

24. It took over a decade of playing, and countless games, but I finally beat my Dad at chess last year.

Years ago, I used to have great fun at the expense of many a cat with a laser pointer.  Fast forward a decade or so, and the fun keeps on burnin’ like a laser:

In keeping with tradition, a record of all the cities (or towns, hamlets, dots-on-a-map) in which I’ve spent at least one night this year:

For all the talk in today’s culture about the “magic of Christmas,” the reality is that it is the very absence of “magic” in the world that gave us need for the incarnation.  Left to our own device, we humans dance dangerously about in darkness.  Left to our incomplete selves, sin reigns supreme.

Only a complete Man could be our hope.  One who was, as the song goes, “pleased as man with man to dwell.”  May the increase of his government and of peace see no end.

Commenting today on John McCain’s “We’re worse off than we were four years ago” ad, George Will observes that the question of being better off should be quantified in terms of more than one’s pocket book:

Unfortunately, the phrase “better off” is generally understood as a reference to your salary, your bank balance, your IRA and the like. But wait. Are you better off being four years older? That depends.

If you are young, since 2004 you might have found romance, had children, learned to fly-fish and become a Tampa Bay Rays fan. In which case you emphatically are better off, even if since 2004 there has been only a 0.6 percent increase — yes, increase — in the median value of single-family homes.

If you are near “the sear, the yellow leaf” of life, in the past four years your expected remaining years of life have declined. But that does not mean you cannot be better off.

Read the whole thing.  It’s George Will at his best.

As someone who has two more children than he did four years ago, I’m certainly better off.  In an election year we must not forget that our prosperity most often has less to do with presidents than it does providence.