I recently attended a political event here in Washington where nine presidential candidates came to speak to a crowd of nearly 3000 people. The same crowd gave every candidate a standing ovation. While some of this was due to the politeness of the crowd, it was noteworthy that each candidate received the superlative endorsement of the crowd. Later at a tribute dinner, there were so many standing ovations for the tributee that it often seemed more meaningful to sit and clap.

Therefore, I’m proposing — if you’ll join me in this contrarian revolution — that a sitting ovation now be the sign from an audience that the limits of greatness have been reached.

Think about it. No more having to stand up again once you’ve situated yourself. No more wondering whether or not you should stand, lest you offend. This revival of the long lost sitting ovation will bring about a new sort of equanimity to the crowd that will further marginalize those rabble-rousers who try to stand up and clap.

Join me in not standing for this nonsense any longer.

That’s the margin by which the Florida Gators won in last year’s game against Tennessee. Does such a slim margin mean that we should hate the Gators any less?

Absolutely not! There’s still plenty of hatred to go around.

One of the questions that I’m most often asked regarding the Gators is this: “Do you hate the Gators any less now that the Ol’ Ball Coach has moved on to the chicken coop?”

By no means! That would be unfair to the Gators to put all my hatred in to one visor-wearing coach.

Yes friends, this is the week that hatred reigns supreme. The Tennessee Vols take on the Florida Gators this Saturday in that completely asymmetrical arena they call the Swamp.

This week, do yourself some favors: hate the Gators. 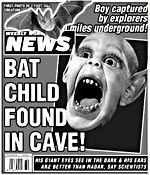 It was with great sadness that I learned of the demise of one of my most trusted news sources, the inscrutable Weekly World News. The New York Times reports that the venerable supermarket staple is soon to shutting down the press.

This is a great loss to the world checkout line journalism. Weekly World News always brought a little realism to a venue overrun by guides to fashion, beauty, and romance. As I stood in line, placing my divider between my items and the person’s in front, it always brought comfort to know that WWN was there to balance out the “101 Ways to Please Your Man” articles of the womens mags with a good dose of “Elvis found alive in Peru!”

For the newspaper which brought us Bat Boy and that crazy alien which endorsed U.S. presidents,the sun has now set, leaving those of us in the checkout lines to Sodoku books, sex guides, and Brangelina. For our serious news, we must now turn to The New York Times.

I’m excited about the return tonight of the Discovery Channel series, “Man vs. Wild.” If you haven’t seen it, you should. Former British special forces adventurer-extraordinaire Bear Grylls parachutes into a remote location with only a knife, a flint, a water bottle (and a camera crew that refuses to give him aid). His goal is to survive long enough to find civilization, and along the way show us, the viewers, how to survive in the wild. It’s great fun to see just how Bear Grylls will find food, shelter, and fend off the wildlife.

Bear Grylls is a tough guy. Anybody who can drink water out of elephant dung or kill a fish by breaking its back — with his mouth — is a force with which to be reckoned.

That’s why, in the spirit of Chuck Norris Facts, Jack Bauer Facts, and Fred Thompson Facts, I’ve decided to enter the realm of internet copycatism and create a list of Bear Grylls Facts. Here they are:

Those are just a few (I know, I could do better…). I’ll try to add other facts as I “discover” them. Anyone else know any “facts” about Bear Grylls?

The Associated Press is reporting that an intern with the U.S. National Archives stole 164 Civil War documents (including an announcement of President Lincoln’s death), which he subsequently put on Ebay. That’s weird.

But that’s not the weirdest part. You see, the thief is conspicuously reported as being a 40 year-old unpaid intern. The report neglects say whether or not he lives with his parents…

NOTE TO NATIONAL ARCHIVES STAFF: always be suspicious of a 40 year-old who wants to work for free.

Last week, some nameless fool stole my license plate from my parked car, prompting the need for a trip to the DMV Saturday morning to obtain a new one. As I waited in the long, seemingly eternal DMV line, I wondered to myself what would prompt someone to steal a single license plate in a state that requires two per car?

It didn’t take long to determine that greater forces were at work. My new license plate (not a vanity plate, thank you very much) just “happened” to bear three all-too-familiar letters: K-G-B.

Lest any certain foreign government agencies get the wrong idea, my loyalties lie with this Red, White, and Blue, not that one.

I’m neither a prophet, nor the son of a prophet. If I were, these would be my predictions for 2007:

That’s my prognostications for 2007. I hope you’re not keeping score…

The news of President Ford’s death has caused some bloggers to remember this video, where SNL comedian Dana Carvey, acting as Tom Brokaw, pre-records the announcement of Ford’s death — in 1996. It’s a funny video, given the fact that it is now common practice for news outlets to have completed obituaries on hand before a public figure passes on.

The practice, though common, is a vulturous tactic that places the need to be first over respect for the living. You just can’t get much worse than writing about the living as though they were dead, right?

This morning, I read the long, somewhat interesting obituary of President Ford in the Washington Post. At the end of the obit is the following notation:

J.Y. Smith, a former obituary editor of The Washington Post, died in January.

I quickly scroll back up to the byline:

By J.Y. Smith and Lou Cannon
Special to The Washington Post
Wednesday, December 27, 2006; Page A01

Yep. A dead man wrote the obituary. This takes “embedded reporting” to an entirely new level. Not since Lazarus have we had someone more qualified to write on the subject. I just a bit surprised that we didn’t get a report on the president from the other side…

For When Celebrities Open Their Mouths…

Yes, it is a real word. There are so many nincompoop–worthy moments out there, somebody has to keep track of them. Here are this week’s contestants:

Miss Johansson makes this week’s awards for her criticisms to the journal Cosmopolitan of President Bush. She remarked in a recent interview:

“We are supposed to be liberated in America, but if our President had his way, we wouldn’t be educated about sex at all,” she told Cosmopolitan.

“Every woman would have six children and we wouldn’t be able to have abortions.”

Methinks, Miss Johansson, that any woman who has had six children is probably pretty knowledgeable about the birds and the bees.

When talk-show host Kelly Ripa’s mouth was rudely covered by guest co-host Clay Aiken , she told him she didn’t like him doing that, because after all, you never know where somebody’s hands have been. Connecting the obvious dots on her own talk show, The View, ex-comedienne Rosie O’Donnell promptly accused Ripa of being homophobic. That’s right, if you don’t like other people touching your mouth, you’re bound to be homophobic these days. [Video]

When the former Seinfeld star was heckled on stage during a stand-up comedy show, he went into a racist, Mel Gibson-like tirade. He went, in other words, bezerk. Then, he showed up on the David Letterman show to give a really bizarre apology. When watching it, you almost expect him to say, “These pretzels are making me thirsty.” One can hardly blame some in the audience for laughing.

That’s all for now, but once word gets out of this prestigious award, competition will be fierce. Stay tuned.

Remember the old saying, “Hey buddy, can you spare a dime?”

Heard on the street today:

“Hey buddy, can you spare a dollar?”